Record Cultivation of Industrial Hemp in Europe in 2016

Read the full story about Europe’s record year for hemp cultivation in the European Industrial Hemp Association press release below.

“Hemp is a multi-purpose crop, delivering fibres, shivs, seeds and pharmaceuticals. Currently, the fibre is used for light weight papers, insulation material and biocomposites. The shivs, the woody inner core of the stem, are used for animal bedding and construction. Hemp seeds, small nuts with a high nutritional value, can be consumed raw or pressed into hemp seed oil, which has an excellent and unique fatty acid profile. Both seeds and oil are used for human food and animal feed. The non-psychotropic Cannabinoid CBD is an interesting pharmaceutical material and food supplement ingredient also derived from industrial hemp. 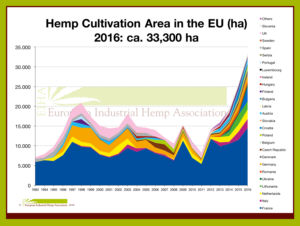 The European Industrial Hemp Association (www.eiha.org) expects almost constant or moderately growing cultivation areas in the next years. The main cultivation areas are in France, the Netherlands, the Baltic Countries and in Romania. In recent years, many new European countries started or expanded their hemp cultivation, mainly to produce more hemp seeds for the health food market. In the last years, hemp food products have entered the mass consumer markets via supermarkets in Austria, Germany, The Netherlands and more countries.

But also the hemp fibre sector is expanding, covering the increasing demand of the automotive industry. European hemp fibres are the only natural fibre worldwide with an established sustainability certification (www.iscc-system.org).

Investments and market growth are especially high in non-psychotropic hemp extracts and for the Cannabinoid CBD, which is used in pharmaceutical applications as well as in the food supplement industry. Here, a patchwork of regulations in Europe is a barrier for faster market growth.

All of these topics will be highlighted and discussed at the biggest event on industrial hemp worldwide, the 14th International Conference of the European Industrial Hemp Association, 7 – 8 June 2017, Cologne (Germany) (www.eiha-conference.org). More than 300 participants from 40 countries are expected. It is the meeting point of the hemp industry worldwide. Don’t miss this unique opportunity to meet the pioneers in this fast expanding business sector in one place.

The European Industrial Hemp Association (EIHA) is a consortium of the hemp-processing industry. It represents the common interest of industrial hemp farmers and producers, both nationally and on a European level. EIHA is the only European consortium in the industrial hemp sector. This sector includes, amongst other things, the use of hemp fibres, shavings, seeds and cannabinoids. Originally founded as an association for the European hemp industry, a quarter of the 130 EIHA’s members are based in countries outside the EU.”